Cheetah and Dog celebrate one year as best friends! (video)

"This social bond will be a very similar relationship, and they will be together for life,” Most people think of cats and dogs as being polar opposites on the spectrum of friendship. That is true for most of the time and it is a fact that dogs have been chasing cats for time memorial. However many times the two species do actually form a friendship if they live in the same household. But at Busch GardensTampa Bay in Florida, the cat/dog friendship takes on a new twist. Last year, visitors to were first introduced to an adorable pair of newborns -- a tiny cheetah cub named Kasi, and a yellow-lab puppy named Mtani. They had little in common beyond the timing and circumstances of their birth, but the bonds of friendship soon proved too strong to be diminished by their differences. For their first 12 months of their lives, the cheetah-puppy relationship seems destined to be a lifelong one. (read more below) 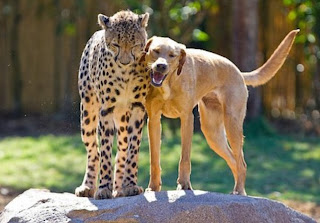 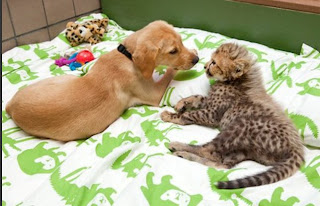 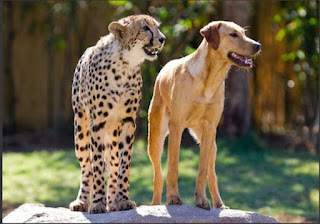 For most of their young lives, Kasi and Mtani have been together at Busch Gardens much to the enjoyment of park guests. But as inspiring as Kasi and Mtani's bond may be, the pairing was ispired with a purpose in mind. Cheetahs are very social animals and because there was not another cheetah at the wildlife park, they set out to arrange another friendship. Cheetahs in the wild are listed as a threatened species, with only a few thousand left. Kasi and Mtani have done wonders to raise awareness of this fact and have inspired donations towards wildlife conservation from those who might otherwise not think to help. Recently Busch Gardens Tampa celebrated a milestone anniversary for their very special relationship. On Monday, April 16th it was the one-year anniversary of the first time park guests got to see an 8-week-old male cheetah cub and a 16-week-old female yellow Labrador puppy begin a friendship that is expected to last a lifetime. Article courtesy of White Wolf Check out their website for other great stories and clips.
Posted by S.D. at 10:56 PM