What gives us the right to treat any creature with such cruelty and disrespect? (video)

No different from a swan, eagle or hummingbird, these poor birds are treated like something that doesn't feel pain and fear. Just treated like an inanimate object with no ability to suffer. What gives us the right? What does our detached, cruel treatment of any living, feeling creatures say about our lack of kindness, our lack of humanity?

Collapsing while pulling carriages during summer heat waves, being forced to stand stationary in the sub-freezing, bitter cold while awaiting the next fare, being tethered to a carriage while being forced to inhale the exhaust fumes of the automobile just inches in front of them - Carriage horses are overworked in the harshest weather and most polluted conditions.

There is nothing charming about this. 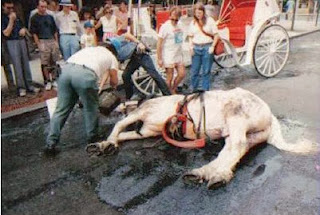 Built for soft ground and pastures, these horses are suffering from early lameness, respiratory disease, heat prostration and spooking (which can lead to accidents and injury).

Watch a trailer for the 2008 NYC based documentary "Blinders" here: http://www.youtube.com/watch?v=31GgmMsFzOM

Many cities in the United States and around the world have already banned the use of carriage horses. And as both major candidates for mayor of New York City support legislation banning this, it's about time Mayor Emanuel get's on board too. Let's demonstrate our compassion by supporting the ban of horse-drawn carriages in our city. Cruelty to animals does not belong in the streets of Chicago.

Please sign this important petition here - http://www.change.org/petitions/ban-horse-drawn-carriages-in-chicago?share_id=FdRnyCfuJl&utm_campaign=mailto_link&utm_medium=email&utm_source=share_petition
Thank you to Michael Spencer for this petition.
Posted by S.D. at 5:31 AM No comments: Links to this post

If you don't know why so many people are "making a fuss" about what is happening to dolphins in Taiji, Japan, please watch this documentary. Winner of the Audience Award for Best Documentary at the 2009 Sundance Film Festival, The Cove follows a high-tech dive team on a mission to discover the truth about the dolphin capture trade as practiced in Taiji, Japan. Utilizing state-of-the-art techniques, including hidden microphones and cameras in fake rocks, the team uncovers how this small seaside village serves as a horrifying microcosm of massive ecological crimes happening worldwide.

Sign the petition to help save Japan's dolphins: http://bit.ly/Rv5Hzp
Posted by S.D. at 4:34 AM No comments: Links to this post

Help Us Stop the Stupidity and Barbarism that is the WA Shark Cull!

More than 80 per cent of Australians oppose the shark cull. So why has Western Australian Premier Colin Barnett began the massacre? Sharks and other marine predators are a vital component of a healthy oceanic environment. Scientists predict that shark culls in Australia and other nations will result in a jellyfish overpopulation catastrophe, and with jellyfish taking over the oceans, it will spell the deaths of all other marine creatures.