Wolves are disappearing, but the cull goes on!

This is an important petition. Sweden's wolves have been hunted nearly to extinction, but that hasn't stopped the Swedish EPA from authorizing wolf culls even today. Now, conservationists are asking the government to spare the life of one wolf in particular.
Susi, the female wolf, is extremely important to the whole of Sweden's wolf population. She has genes that are "fresh" and different from the rest of the populations which is inbreed.

She needs to be saved at any and every cost. 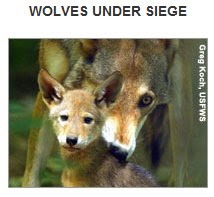 Officials are now waiting for this stormy petition to die OFF before giving a go ahead to kill her.
Don’t let that happen, KEEP SIGNING, Please !

A most certain decision to kill her was to be announced on Tuesday February 19, 2013 but a court ruling had stated that she is not to be touched until a final ruling is achieved and that ruling will come end of this week. (Read updates at the bottom. Ruling has come but it's not over yet).

Keep signing to put pressure on Sweden to save her.
Government officials (EPA) will continue to try to find loopholes and ways to get this through, to get the rights to kill her. The only way to finally get a stop to this madness is through the international pressure that you are helping me with.

The rest of Sweden's wolves are heavily inbred and that comes from the state sanctioned hunting and killing off all the important wolves that come into our country.

This is a tactic they have had for many years now, but in this case this wise female eluded the hunters until a temporary court order saved her for a while. This was the first time a court order saved wolves in Sweden.
Since they have killed every partner she has found and therefore can't get a family, she is forced to hunt alone which is not normal for a wolf. Wolves need to live in big families called packs.
Wolves main prey are the elk, but they are too big for a single wolf to take down so she is forced, by the decision makers, to hunt small prey and the most abundant small prey is the reindeer. Since we only have domestic reindeer after eliminating all the wild ones, she can't hunt any other prey than domestic reindeer which in turn is what they, the decision makers, refer to when deciding that she has to die, saying she takes too many reindeer's.

In the Swedish law it's stated that all other measures of protecting livestock has to be taken before a license to kill a predator can be given but that law is toothless and has never been complied with in any case. Wolves are being killed constantly without ever having implemented any of the more normal steps of protecting livestock and same goes for this case. The reindeer's are not at all protected.

The decision makers won't let her get a family and they won't let her hunt the only prey she can hunt without a family.
No matter what she does she's doomed to be killed.

UPDATE Feb 19, 2013
The court has ordered that this wolf is not to be touched until a final ruling has been decided upon and that ruling is to come any day now.

Unfortunately our "Swedish Environmental Protection Agency" has told media that they will not await such a decision, which means they are breaking the law. Appalling how a state owned agency pretending to stand for the protection of nature and wildlife is actually the one destroying it AND breaking the law. This is how great our democracy is. Don't be fooled by our propaganda. This agency is often deciding against nature and wildlife.

Update Feb 21, 2013:
Late yesterday the court came out with it's ruling. In short it states that no hunting on Susi will be allowed. They court says that the Swedish Environmental Protection Agency decision to kill her does not meet the criterias for an exception from the prior decision they made from prohibiting any more killing of wolves.

Susi is not safe YET. More applications to kill her come in all the time, and have just come in as I write this, and the Swedish Environmental Protection Agency will continue to try and get rights to kill her. So please, PLEASE, keep signing this petition. I'm hoping that at some point they will realize their madness and stop this pursuit.

Update Feb 22, 2013:
The EPA (Swedish Environmental Protection Agency) had in mind to give a go ahead today but they have put it off until next week and the most probable reason for that is that this petition is too hot at the moment. They want to wait until this wears off and then give the go ahead to kill her. It’s almost unheard of them putting off these decisions.
So PLEASE keep forwarding this petition to anyone you know and on every forum you can. Don’t let this wear off until we get a final decision, hopefully, that they will spare Susi.
We will never give up, they better realize that.
Petition Target: Lena Ek (minister), Maria Aagren (EPA), Bo Kaellstrand (governor)
Sponsored by: Mats Carnmarker

Sweet video! Mama cat to the rescue, but little kitty has other ideas...

Stuck up a tree, this tiny kitten looks like it needs some help from mama, so up the tree mum goes, but baby decides that she can get down by herself.

This man accomplishes more than any government...

He practices the art of love and kindness and makes a huge difference to the lives of those who have been forgotten by governments and families. Let this man and his practice of genuine compassion inspire you...


After sharing the wonderful clip above, I came across another clip which is the complete opposite. Above we have a man who cares for the forgotten and lives by unconditional love and compassion; while the man below is busy thriving on adulation, reaping in huge sums of money from the gullible, and exalting himself as above all others. Narcissism is certainly not walking any divine path, and will definitely not contribute to the improvement of others' lives or the healing of our world. We are all capable of aspiring to be more like the first man, and our society aspiring to be less like the second.

Our consumer dollar can either keep contributing to the massacre of these gentle creatures, or help protect and save the orangutan. Read more below...http://www.saynotopalmoil.com

Veganism Is The Future3 days ago
http://www.saynotopalmoil.com/ ''Did you know that each and everyone of us is fueling one of the world's biggest ecological disasters and acts of primate genocide in history? Borneo and Sumatra are two of the most bio-diverse regions of the world, yet they have the longest list of endangered species. This list includes the magnificent orangutan. These two South-East Asian islands are extremely rich in life, containing around 20,000 flowering plant species, 3,000 tree species, 300,000 animal species and thousands more being discovered each year. Despite this amazing biodiversity and delicate web of species, an area the size of 300 football fields of rainforest is cleared each hour in Indonesia and Malaysia to make way for the production of one vegetable oil. That's 6 football fields destroyed each minute. This vegetable oil is called palm oil, and is found in hundreds of the everyday products, from baked goods and confectionery, to cosmetics and cleaning agents... many of which you buy in your weekly shopping. Due to the massive international demand for palm oil, palm oil plantations are rapidly replacing the rainforest habitat of the critically endangered orangutan; with over 90% of their habitat already destroyed in the last 20 years. Orangutans are some of our closest relatives, sharing approximately 97% of their DNA with humans. Orangutan means 'Person of the jungle' in the Indonesian language. It is estimated that 6 to 12 of these 'jungle people' are killed each day for palm oil. These gentle creatures are either killed in the deforestation process, when they wonder into a palm oil plantation looking for food, or in the illegal pet trade after they've been captured and kept as pets in extremely poor conditions and provided with extremely poor nutrition. Orangutans are considered as pests by the palm oil industry. In the deforestation process, workers are told that if wildlife gets in the way, they are to do whatever is necessary in order to dispose them, no matter how inhumane. Often orangutans are run over by logging machinery, beat to death, buried alive or set on fire... all in the name of palm oil. Government data has shown that over 50,000 orangutans have already died as a result of deforestation due to palm oil in the last two decades. Experts say that if this pattern of destruction and exploitation continues, these intelligent acrobats of the jungle will be extinct in the wild within 3 to 12 years (as early as 2015). It is also thought that their jungle habitat will be completely gone within 20 years (approximately 2033). Around 50 million tons of palm oil is produced annually; with almost all of that being non-sustainable palm oil, that replaces 12 million hectares of dense, bio-diverse rainforest. That's the equivalent landmass of North Korea deforested each year for palm oil alone! Palm oil is also having a shocking impact on our planet. The production of this one vegetable oil is not only responsible for polluting rivers and causing land erosion, but when the plantation workers set fire to the remaining trees, shrubs and debris to make way for the oil palms, it produces immense amount of smoke pollution that is toxic to planet earth. This has been found to be the second biggest contributor to greenhouse gas in the world. By purchasing products that contain crude palm oil, you are helping destroy ancient, pristine rainforest, wipe out species like the orangutan, and create a large-scale ecological disaster. Think of the consequences next time you do your weekly shopping; the consequences not only for orangutans and other animals, but for us as the human race; for we cannot survive without the rainforests either. We have a choice, orangutans do not.''