A moving story about an amazing, courageous woman who works tirelessly to help animals, and people in need, in South Africa.

Cora Bailey ventures into some of South Africa’s most deprived townships to treat people’s animals, but she also has to confront the even more urgent needs of their owners.

“There’s hardly a day goes by when you don’t see some kind of suffering,” she tells Dateline's Amos Roberts. “Sometimes you see suffering that’s almost indescribable.”

In the tough townships where she works, people can’t afford animal care, but she just can’t say no to treating the ill, injured and abused animals that come her way.

Cora’s work started 25 years ago, after she became frustrated by the lack of concern for animal welfare in the townships.

“I had to raise the money myself and it was all at my own risk and there was a lot of negativity about it,” she says.

But violence is still a daily reality that she’s witnessed firsthand – the area where she works has one of the highest murder rates in the province.

And that divide between rich and poor in modern South Africa angers her.

“I can be in the townships for weeks on end, going daily and never see another white. Sometimes just a bus with tourists and they are all foreign and what a shame that is.”

“We South Africans aren’t a bad lot and I think a lot more people would do things if they got over their fear - you know people in this country fear each other.” 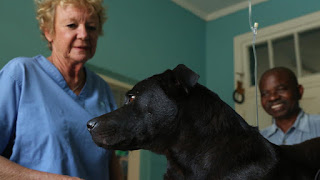 Beautiful footage of a mother whale and her calf

Goes to show, drones can be used for something positive. This video footage of a mama whale and her baby taken by a drone, is stunning.

Put an End to Killer Whale Shows at Seaworld!

Killer whales are beautiful and incredibly intelligent animals that deserve so much more. Whales in captivity are subjected to conditions that are not only unnatural but also cruel. They spend their day swimming around a concrete pool when whales in the wild often swim 100 miles a day. It is a known fact that animals in captivity used for performing are subject to depression, frustration, and lack of energy. Often times whales are seen floating at the surface for hours on end which would never happen in the open ocean. Though SeaWorld has denied it, there is footage describing how they have separated mothers and calves which sadly only adds to their whales' depression. Roughly 95% of killer whales in captivity experience collapsed dorsal fins while this only occurs in 1% of orcas in the wild.
Orcas have highly developed brains which allows them to have strong family bonds and heightened emotions. Captivity deprives them of so much and their quality of life is at an extreme low which too often results in aggression.
These are just a few reasons why I strongly urge you to help me give killer whales the life and freedom that they so greatly deserve.


Update #1 May 28, 2015
SeaWorld is continuing their efforts to increase ticket sales and so far they have been successful. After the release of Blackfish, attendance declined as audiences realized that keeping whales in captivity for entertainment is wrong. However with their new commercial drawing people back in, now is the time to act and put a stop to this.