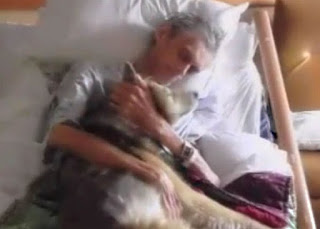 This beautiful photograph shows a homeless man in care, given the chance to say good-bye to his loving, faithful dog before the man passed over. A dignified end, and important good-bye for both. (Originally, this article had a photograph of another man hugging a dog but was removed on the copyright holders request. Their comments can be found below.)

However, this article is about the many thousands of animals that are put to sleep every day, all over the world. About the compassionate vets, workers, and volunteers who must cope with putting down these poor, sweet animals - animals who only want to live, love and be loved. It is about the last hugs that may be given to these beautiful animals, before their passing; animals that through no fault of their own, have ended up in a shelter or pound, and killed because these dogs (and cats)are not lucky enough to find a suitable new home within the very short period of time alloted to them to be adopted out. This article is also about the many dogs who are simply killed because they are the "wrong" breed. No dog should be classed the "wrong" breed! They are all share a common heritage, and all dogs are capable of the same unconditional love and companionship that dogs possess and express, if they are treated with care and kindness.

There is a breed ban which went into affect Monday the 5th of December 2011 all Dobermans, Rottweilers, Chow Chows, German Shepherds, Great Danes, Pitbulls, Mastiffs (all bully breeds), Akitas and Huskies. These dogs will be held for the mandatory 72 hrs and then will be killed, they are not going to be given a chance to be adopted. If the dog is an owner turn-in, then it will be killed the second it walks into the back.

We need petitions and people to speak out about this terrible, lethal discrimination towards certain BEAUTIFUL, LOVING, dog breeds!! Please lend your support by fb "liking" the animal welfare group listed below.
Information courtesy of The Official Voice For The Voiceless Please Join Us To Make A Difference

PS In reference to the photograph, no one should ever, ever have to put down a healthy, adoptable animal, and suffer the trauma and sadness that goes with this experience! The ones to do this work need to be compassionate people in order for the animals to be put to sleep humanely, but there are ways we can stop these unnecessary animal deaths from EVER happening again! Don't buy animals from online sources and breeders. Have your pet desexed, and encourage and educate others you know to be aware that it is VITAL that they also desex their pets. We need to encourage those looking to purchase a pet to seek out pet shelters to adopt an animal, and consider adopting an adult dog or cat. My cat Maxie was ten years old when I adopted him, and he had been abused and dumped at the pound to die. I adopted him from the pet store that ONLY rehouses animals from the Animal Welfare League shelter. He was very scared at first, and took a while to adjust to his new life. Only months later, he was the happiest, most fun, loving, sweet furry buddy you could ever imagine! We need to petition governments to enforce systems of compulsory pet desexing, pet care education programs and licenses (like sitting for an exam to qualify for a drivers license, people should prove they have the knowledge base and nature suitable to care for a pet or pets - a license would then qualify them to adopt and care properly for a pet or pets.) This photograph shows that this last hug was a loving one, but it should never have been his last hug.
Posted by S.D. at 7:21 PM