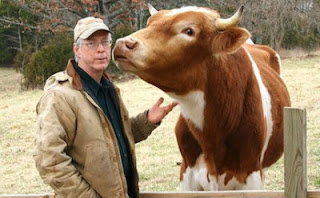 Written by David Lay of Missouri (Care of www.care2.com & The Great Animal Rescue)

Traveling with a neighbor to pick up some cows he bought, I ended up with a beef cow of my own. Minnie, a Brangus (a cross between an Angus and a Brahma) was among the 25 other cows my neighbor had bought. The owner asked him if he wanted this one cow who didn’t calve last year. When a cow misses a calving, very often they are “culled” because the farmer can’t take the chance she’ll miss again, costing him too much money.

“No, I really don’t want her,” my neighbor said.

The owner then said that he’d just have to “send her off” himself.

I don’t know why, but I felt sorry for the old girl and piped up “I’ll take her!” and so my neighbor loaded her onto his trailer with his newly aquired cows and off we went back home. I have a small farm with a few milk cows and I just couldn’t imagine what I was going to do with a beef cow, especially one that couldn’t have calves, but I did know I couldn’t stand the thought of her being slaughtered. She had a shiny, jet black coat and big, beautiful eyes, and I soon found out she was very tame and liked to have her tail scratched.

Since Minnie was a cow that couldn’t have calves, I just let her out with the other cows and my bull figuring I just had a big pet. Nine and one half months later, Maxwell, her new little bull calf, was born. It also turns out she’s a great milker, too. She was very easy to train to be milked, and gives a very rich, white milk. Since then she’s had another calf named Maynard, a daughter named Molly, and just last month had a little boy named Mutt. Because she was crossed with a dairy bull, her sons make great oxen, with long legs and powerful muscles, who can, therefore, live long and useful lives with someone who can use these big, beautiful animals to help around the place and eat hay when there’s nothing else to do. As for the heifer calf, I’m training Molly to go through the milking stall with the other cows, and now I’m figuring out a way to start a school to train oxen (and their owners).

Most cows aren’t this lucky. We slaughter more than 3 million cows a day in this country, and Minnie wouldn’t have even been a blip on the radar. Saving one cow doesn’t seem like much, until you meet her and you reallize what an incredible girl she is. She is very intelligent (she figures out how to open gates and finds the shortest path to the feed) and will always walk over to me for a scratch on her back when I come into the field. Minnie will live out her natural life here on my little farm, and will leave a legacy (and a lot of progeny) behind when she goes to that big pasture in the sky. Not bad for the “little” cow that couldn’t. 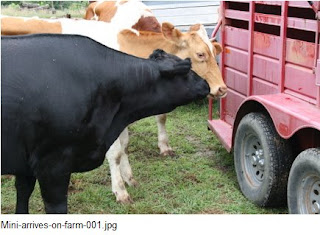 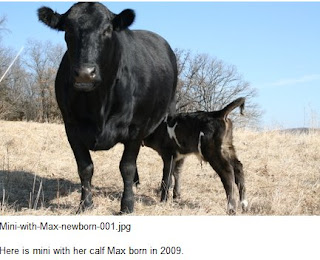 David’s farm cost him more than $40,000 last year and its income was a little over $6,000. It’s essentially a working sanctuary which he funds on his own. He does not separate calves from their mothers during nursing and would never dream of sending them off to become veal.

As for training oxen, he explains, “Animals that are trained to do work and are well cared for live long, happy lives. They often become very dear pets for their owners, whom I will try to screen to make sure they will not use these animals in cruel and inhumane ways; hence I create a way for an animal that would otherwise be someone’s food to not only live but to have an occupation that puts it in demand as something other than dinner, which is a very short occupation indeed.”

David knows that without his farm, most of the cows would become a ”half-eaten hamburger at McDonald’s thrown in the trash.” 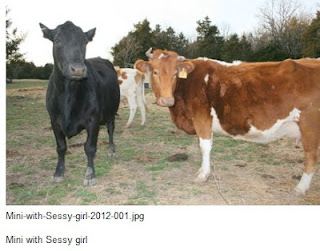