Help stop the cruel trade of the "masked" monkeys of Indonesia...

Please sign the petitions below, see the footage, and read the story of how these poor monkeys suffer due to gross human exploitation. (Article courtesy of Tony Zadel) 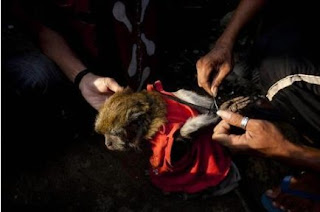 Inside the cruel trade of the masked monkeys of Indonesia. Please sign and share these petitions widely. Thank you for assistance to save and protect these poor monkeys -
**1. http://www.theperfectworld.com/petitions/item/40-the-masked-monkeys-of-indonesia 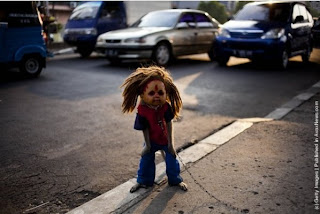 These poor monkeys, like the ones pictured here and above, often endure beatings, have their hands and limbs tied, and endure stifling heat and near suffocation with plastic dolls heads covering their faces to "entertain" the public and make money for the monkey masters.


Ed Wray a famous photographer was terrified the first time he encountered a masked monkey. Having lived and worked in Jakarta as a freelance photographer for years, he was accustomed to seeing the animals, cruelly leashed by chains, jumping through hoops or riding trikes on the sidewalks. But for Wray, the mask was a terrifying twist.

“When I first saw a monkey with a rubber baby doll’s head stuck over its head as a mask, it immediately struck me as horrifying and beyond weird.” Wray said. “Something about the combination of the doll head – which I think is scary looking to begin with – and a long tail just struck a chord in me.”

Shocking to many Westerners, it’s a common sight on the streets of Jakarta. Most Indonesians pass along unfazed or mildly amused and a few give the handlers money. “Whether they feel more sorry for the monkey or handler, I don’t know.” Wray added.
Wray decided to venture past the sidewalk performances and explore where the monkeys lived and how they were trained. “Initially I was purely interested in the masked monkeys,” Wray said. “But once I saw the village and the condition in which the people there lived alongside the monkeys, another grim layer was added to the pictures and to my thinking about the monkeys.”

“The idea came to me that the disturbing image of the monkeys wearing the masks is a visual distillation of the kinds of horrible things that happen when people are driven to desperation by poverty.”

Wray said he was going to continue with the project, adding, “One thing I would definitely like to concentrate on is how the monkeys get to the city from the jungle—the commercial process that brings them into urban areas as pets or performers.”

Misery of Indonesia's monkeys: Chained macaques forced to dress up in doll costumes and ride scooters for tourists attraction ! this has to stop !!! ''Topeng Monyet'', or dancing monkeys, is a particularly cruel practice where juvenile macaques are forced to perform (dance, ride bicycles, wear masks) in the crowded and busy streets of Jakarta. An illegal trade in wild macaques that are captured from the wild !! has built up around the phenomena known as Topeng Monyet.They live in a place called "Monkey Village" and are kept in small cages and in chains. Trainers sometimes hang them upside down or tie their hands on their back to make them go up- straight like you can see on this picture !! 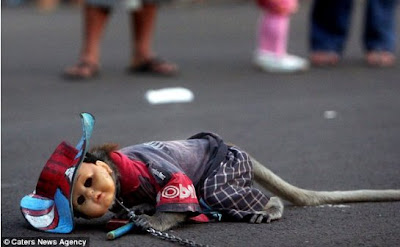 **PLEASE WATCH THIS GALLERY PICTURES CLICK ON THE RIGHT SIDE OF EACH PICTURE at the link - http://lightbox.time.com/2011/05/25/the-masked-monkeys-of-indonesia/#1 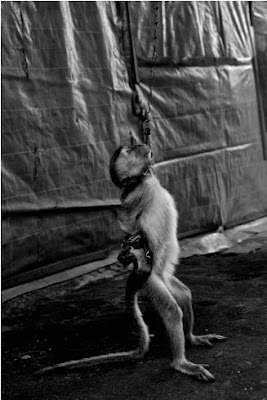 Photograph by Ed Wray showing a "masked" monkey being strung up to force him/her to stand up straight to mimic a human or doll.

Different media have different perspectives on the ethics of Jakarta's masked monkey entertainers.

Chained monkeys are being forced to dress up and ride toy motorbikes to entertain crowds of tourists at an Indonesian animal park. - http://youtu.be/C4Mi_Bifb90

Street Monkey Mask and Feet Indonesia - This how monkeys are treated in Indonesia ! http://youtube/Uy5jAVgRbLA