The Discovery of Dolphin Language by scientists

The Discovery of Dolphin Language | Wake Up World

The Discovery of the Dolphin Language 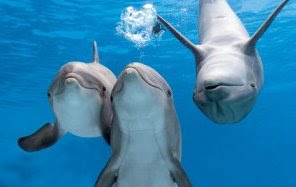 Researchers in the United States and Great Britain have made a significant breakthrough in deciphering dolphin language in which a series of eight objects have been sonically identified by dolphins. Team leader, Jack Kassewitz of SpeakDolphin.com, ‘spoke’ to dolphins with the dolphin’s own sound picture words. Dolphins in two separate research centers understood the words, presenting convincing evidence that dolphins employ a universal “sono-pictorial” language of communication.

The team was able to teach the dolphins simple and complex sentences involving nouns and verbs, revealing that dolphins comprehend elements of human language, as well as having a complex visual language of their own. Kassewitz commented,
"We are beginning to understand the visual aspects of their language, for example in the identification of eight dolphin visual sounds for nouns, recorded by hydrophone as the dolphins echo located on a range of submersed plastic objects."

The British member of the research team, John Stuart Reid, used aCymaScope instrument, a device that makes sound visible, to gain a better understanding of how dolphins see with sound. He imaged a series of the test objects as sono-pictorially created by one of the research dolphins. In his bid to “speak dolphin” Jack Kassewitz of SpeakDolphin.com, based in Miami, Florida, designed an experiment in which he recorded dolphin echolocation sounds as they reflected off a range of eight submersed objects, including a plastic cube, a toy duck and a flowerpot. He discovered that the reflected sounds actually contain sound pictures and when replayed to the dolphin in the form of a game, the dolphin was able to identify the objects with 86% accuracy, providing evidence that dolphins understand echolocation sounds as pictures. Kassewitz then drove to a different facility and replayed the sound pictures to a dolphin that had not previously experienced them. The second dolphin identified the objects with a similar high success rate, confirming that dolphins possess a sono-pictorial form of communication. It has been suspected by some researchers that dolphins employ a sono-visual sense to ‘photograph’ (in sound) a predator approaching their family pod, in order to beam the picture to other members of their pod, alerting them of danger. In this scenario it is assumed that the picture of the predator will be perceived in the mind’s eye of the other dolphins.

When Reid imaged the reflected echolocation sounds on the CymaScope it became possible for the first time to see the sono-pictorial images that the dolphin created. The resulting pictures resemble typical ultrasound images seen in hospitals. Reid explained: When a dolphin scans an object with its high frequency sound beam, emitted in the form of short clicks, each click captures a still image, similar to a camera taking photographs. Each dolphin click is a pulse of pure sound that becomes modulated by the shape of the object. In other words, the pulse of reflected sound contains a semi-holographic representation of the object. A portion of the reflected sound is collected by the dolphin’s lower jaw, its mandible,where it travels through twin fat-filled ‘acoustic horns’ to the dolphin’s inner ears to create the sono-pictorial image.