(update now below this original article) On Monday afternoon, in the midst of the crowded streets and sidewalks near Union Square in N.Y., police opened fire on a pit bull mix who was barking at passersby in front of a KFC restaurant.

According to the New York Observer, the dog was a regular fixture in front of the KFC. His owner, a homeless man, spent his days in the same location. Those who knew the pair stated that the dog was never a problem. 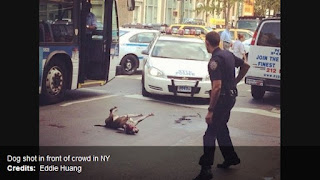 But today, the homeless man was passed out and the dog was barking - perhaps barking protectively because of his unconscious guardian.

A witness stated that the police tried to mace the barking dog and in response, the dog lunged.

The officer responded by pulling a gun and shooting the dog.

Unfortunately for the dog, and those with the misfortune of being in the area, the dog did not die quickly. Instead, the grievously wounded dog was writhing in pain on the ground as witnesses allegedly pleaded for the officer to put him out of his misery.

But the dog was not shot again...instead, he was left to die a slow, agonizing death.

Those people familiar with the man and his dog wonder who this officer was. They surmise that he must have been new to the area because the officers who typically patrol this area would know the pair - and know that they were not a danger to the public.

Article courtesy of the Examiner 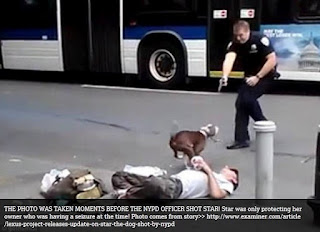 The Lexus project released a statement updating the public on Star the dog shot by a NYPD officer while she was protecting her owner Lech Stankiewicz.

Stankiewicz suffered an epileptic seizure leaving him immobile and lying partially in an east village street in New York, earlier this week.

Star survived the gun shot and was taken to Animal Care and Control (ACC) of NYC, but the public quickly became concerned about Star’s health and welfare after ACC remained silent about her intake. The public started questioning ACC’s motives for their silence, and Amanda Lewis and Sasha Sabbeth reached out to the Lexus project to help them get answers on the health and welfare of the now famous Star.

Lexus project released this statement about Star earlier today; “We know that so many of you are concerned, worried and outraged about Star. This is an update and although I know you want more but please respect this is all we are permitted to say at this time. Star is very much alive and receiving medical care and holding her own. We will update as soon as we are permitted to. Thank you for your support and understanding.”

The Lexus project was founded in 2009 after a high prey greyhound named Lexus was declared a vicious dog. Lexus sat on death row in a Rhode Island kill shelter waiting to be put down. Robin Mittasch read her story and asked her husband Richard Rosenthal, an attorney to motion for her release.

The Lexus project is now a law firm for dogs. They provide legal defense on a case by case basis for dogs they believe are improperly or unfairly facing dangerous dog designations or euthanasia.

With the Lexus project on Star’s case, the public may get some much needed answers.
(more information here - http://www.examiner.com/article/lexus-project-releases-update-on-star-the-dog-shot-by-nypd