Shocking evidence that the Japanese Nuclear disaster is continuing to reek havoc with the world's ecosystems. This Google Map taken in March 2012 providing evidence radioactivity is spreading outwards from Japan, creating ever-expanding oceanic dead zones! Why isn't anything being done about it? Maybe because the information is being subdued? Maybe because they don't think they CAN do anything about it? Maybe they are hoping the problem will just "go away" and people won't notice if the media doesn't bring attention to it? Whatever the reason, we all need to do something about this AND QUICK! The whole world's ecosystems, not just the oceans, are at stake, and health and future of all of us! Please share this and get the word out so we can "encourage" governments and industries to pool their resources to fix this dire threat to the future of all life on Earth! 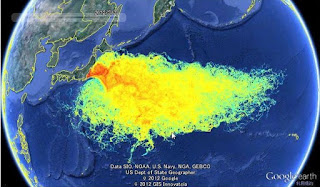 More about this dire situation care of The Guardian Newspaper -


Fukushima reactor shows radiation levels much higher than thought
Damage from disaster so severe that clean-up expected to take decades, according to latest examination of nuclear plant

One of Japan's crippled nuclear reactors still has fatally high radiation levels and much less water to cool it than officials estimated, according to an internal examination that renews doubts about the plant's stability.

A tool equipped with a tiny video camera, a thermometer, a dosimeter and a water gauge was used to assess damage inside the number two reactor's containment chamber for the second time since the tsunami swept into the Fukushima Daiichi plant, a year ago.

The data shows the damage from the disaster is so severe the plant operator will have to develop special equipment and technology to tolerate the harsh environment, and decommission the plant. The process is expected to last decades.

The other two reactors that had meltdowns could be in even worse shape. The number two reactor is the only one officials have been able to closely examine so far.

Tuesday's examination, with an industrial endoscope, detected radiation levels up to 10 times the fatal dose inside the chamber.

Plant officials previously said more than half of the melted fuel had breached the core and dropped to the floor of the primary containment vessel, some of it splashing against the wall or the floor.

Particles from melted fuel have probably sent radiation levels up to a dangerously high 70 an hour inside the container, said Junichi Matsumoto, spokesman for the plant operator, Tepco. The figure far exceeds the highest level previously detected, of 10 sieverts an hour, which was detected around an exhaust duct shared by the number one and two units last year.

"It's extremely high," he said, adding that an endoscope would last only 14 hours in those conditions. When locating and removing melted fuel during the decommissioning process, he said, "we have to develop equipment that can tolerate high radiation". Read more here...
Posted by S.D. at 3:31 AM