People against swimming with dolphins!

People against swimming with dolphins!
posted by Jake Richardson 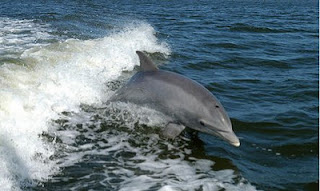 A woman who swam with dolphins has written a very brave counterpoint to all the overblown discourse on the joys of swimming with dolphins. She says she loves them, so she will never swim with them again because she now knows how much suffering is caused by keeping them in captivity. “Captive dolphins experience severe trauma, stress, boredom, claustrophobia, sickness, insanity and early death. They are unable to hunt or behave naturally, are confined to areas much smaller than what is healthy for their species, and some captive dolphins commit suicide,” she wrote. (Source: cereplast.com) (Her first and last dolphin swimming experience took place in Cancun.)

It isn’t clear exactly where the dolphin suicide notion came from, or if it actually occurs but everything else she wrote is backed by reputable organizations like the Humane Society and the World Society for the Protection of Animals. First of all, let’s be precise about where captive dolphins come from. They are herded in the wild and captured, resulting in stress, injury and even death. According to WSPA, 53% of dolphins don’t survive the first three months of captivity after being captured and transported. Captive dolphins are probably highly stressed due to being confined in small spaces, and nearly every space they are kept in is far too small when you consider they can swim 40 miles a day or more. Also, they are being kept against their will–if they had a choice they would surely return to open, natural waters. In captivity, they are often separated from family members for no reason, which is very stressful to them.

There might be 1,000 dolphins in several hundred facilities kept for swimming with people or stunt exhibitions for paying visitors. This cottage industry has been described as unsustainable due to the fact more and more wild dolphins must be captured to populate the facilities because of captive dolphin deaths, low reproductive rates and shortened life spans.

The only reason such facilities offer dolphin swims is to make money for themselves. They may market the swims as education, but clearly they are trying to cover their true motive. Paid swims often include the dolphins having to perform stunts like pulling the customers through the water, or swimming with a customer standing on them. These kinds of tricks are not the least bit educational and only are done for the sake of entertainment.

Also, the high cost of swims sometimes over one hundred dollars indicate they are done for profit not education. One can learn much more by watching dolphin documentaries for very little money (Netflix) or clips on YouTube, which would be free.

The National Ocean and Atmospheric Administration has published guidelines that support the blogger’s view dolphins should be left alone. NOAA says about wild dolphins:

Dolphins are not water toys or pets.
“However, truly wild dolphins will bite when they are angry, frustrated or afraid. When people try to swim with wild dolphins, the dolphins are disturbed. ”

Dolphin scientists have proof of injuries.
“Feeding wild dolphin disrupts their social groups which threatens their ability to survive in the wild. Young dolphins do not survive if their mothers compete with them for hand-outs and don’t teach them to forage.” (Source: NOAA.gov)
Posted by S.D. at 9:33 PM